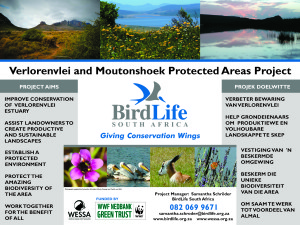 Verlorenvlei estuary and its water catchment area, which are major conservation
priorities on the West Coast, are now on the path to becoming protected areas whilst
also maintaining an important role in agriculture in the Sandveld region.

BirdLife South Africa, in partnership with the Wildlife and Environment Society of South
Africa (WESSA), was recently granted funding from the WWF Nedbank Green Trust to
implement the Verlorenvlei Protected Areas Project. “We are extremely grateful to the
WWF Nedbank Green Trust for recognising the importance of this estuary, including its
incredible birdlife” said Dale Wright, BirdLife South Africa’s Regional Conservation
Manager in the Western Cape. Mr Wright added “The Verlorenvlei estuary, near Elands
Bay on the West Coast of the Western Cape, is one of our Important Bird and
Biodiversity Areas (IBA), hosting over 200 bird species including significant populations
of many threatened and migratory bird species, as well as threatened and endemic fish.
The estuary is also a proclaimed Ramsar site, and thus recognised as a wetland of
international importance.”

These IBA and Ramsar statuses do not however infer formal protection or conservation
action at the site, and this new project will attempt to bridge this gap by protecting
both the estuary and its principal water catchment area. The Verlorenvlei Protected
Areas Project is therefore taking a proactive approach to solving the conservation issues
affecting the estuary by looking upstream to additionally protect the Moutonshoek
catchment, which supplies 60% of the water to the estuary. Without this water flow,
the estuary will cease to be a safe-haven for its incredible biodiversity.

BirdLife South Africa and its partners, which include CapeNature, plan to work with local
farmers to protect the Moutonshoek catchment which supplies the Krom Antonies
River, the main tributary of the Verlorenvlei estuary. The valley and its catchment are
important potato growing areas, and agriculture provides much local employment. Mr
Wright further added “Biodiversity Stewardship, a model which is at the forefront of
progressive conservation action, will be utilised. This allows for the existing agricultural
activities to continue, but with improved environmental management practices in place,
thereby allowing the parallel objectives of conservation and sustainable-use of the
landscape to work hand in hand.”

Samantha Schroder has taken up the position of Project Manager at BirdLife South
Africa. Samantha will receive further guidance from the Greater Cedarberg Biodiversity
Corridor Unit, within which the Verlorenvlei Project area falls, and WESSA, who have
worked extensively to promote sustainability at this site.

The project will start with meetings with farmers and other role players in the area. It is
important that the needs of the farmers and other land users are recognised in order to
generate the kind of positive collaboration required for true landscape sustainability.
The existing Verlorenvlei Estuary Management Forum which comprises key
stakeholders concerned with the conservation and wise-use of the estuary will provide
an important platform from which to launch this ambitious project.