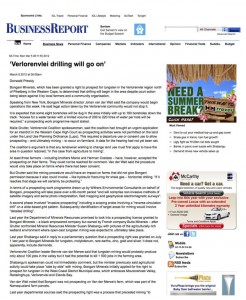 Bongani Minerals, which has been granted a right to prospect for tungsten in the Verlorenvlei region north of Piketberg in the Western Cape, is determined that drilling will begin in the area despite court action being taken against it by local farmers and a community organisation.

Speaking from New York, Bongani Minerals director Johan van der Walt said the company would begin operations this week. He said legal action taken by the Verlorenvlei community would not stop it.

It is expected that some eight boreholes will be dug in the area initially with up to 160 boreholes down the track. “Access for a water tanker with a limited volume of 200 to 220 litres of water per hole will be required,” a prospecting work programme report stated.

Malie Grutter, Verlorenvlei Coalition spokeswoman, said the coalition had brought an urgent application for an interdict in the Western Cape High Court as prospecting activities were not permitted on the land under the Land Use Planning Ordinance (Lupo). This required a departure use or consent use to allow prospecting – and ultimately mining – to occur on farmland. A date for the hearing had not yet been set.

The coalition’s argument is that any landowner wishing to change land use must first apply to have the area in question rezoned, “in this case from agriculture to mining”.

At least three farmers – including brothers Manie and Herman Coetzee – have, however, accepted the prospecting on their farms. They could not be reached for comment. Van der Walt said the procedure would only take place on farms where there had been consent.

But Grutter said the mining procedure would have an impact on farms that did not give Bongani permission because it also could involve – like hydraulic fracturing for shale gas – horizontal drilling. “If it reaches that stage we will certainly be protesting.”

In terms of a prospecting work programme drawn up by Withers Environmental Consultants on behalf of Bongani, prospecting will take place over a 60-month period “and will comprise non-invasive methods of satellite imagery and aerial photo interpretation, field mapping and geophysical electromagnetic surveys”.

Last year Shabangu said in reply to a parliamentary question that a prospecting right was granted on July 1 last year to Bongani Minerals for tungsten, molybdenum, rare earths, zinc, gold and silver. It does not, apparently, include diamonds.

Verlorenvlei Coalition leader Bennie van der Merwe said that tungsten mining would probably produce only about 100 jobs in the valley but it had the potential to kill 1 500 jobs in the farming area.

Shabangu’s spokesman could not immediately comment, but the minister previously said agricultural activity could take place “side by side” with mining. Bongani Minerals initially applied for the right to prospect for tungsten in the West Coast District Municipal area, which embraces Moutonshoek Valley, Redelinghuys, Verlorenvlei and Elands Bay.

Van der Walt noted that Bongani was not prospecting on Van der Merwe’s farm, which was part of the Namaqualand farm parcels.

Last year departmental sources said the prospecting right was a process that preceded mining “to determine the extent and nature of the resource”. All agricultural and environmentally sensitive areas had been excluded from the right, it said at the time.

The department said all objections had been tabled and considered by the regional mining development and environmental committee, which included outside stakeholders. This committee had made a recommendation for the granting of the right.

Coalition lawyer Martin Coetzee has written to Withers Environmental Consultants indicating that its invitation to the coalition to serve on an environmental management committee would not be countenanced.