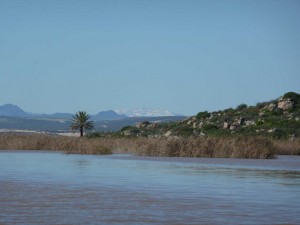 Snow-capped peaks beyond the Verlorenvlei

June; a glorious month of rain and sunshine, thunder and lightning, green landscape and birdsong. Early some mornings a delicate scent of green peppers and in the evenings the scented thorn sweetened our ambles along the edge of the vlei.

Going up a kloof one afternoon we sprang a pair of spotted eagle owls who were sleeping in a huge rhus. They also rest in the rock figs (ficus cordata), that cling to the stony cliffs about an hour and a half up the vlei from our house.

On top of these cliffs we have found a flat green terrace, shaded by a huge rock fig; a picnic spot laid out so perfectly that it was hard not to imagine that some contriving agent had been working on our behalf in the landscape. 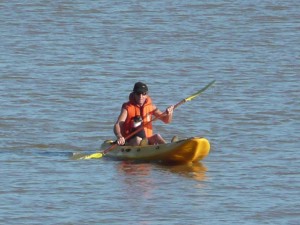 Paddling on the vlei

From Friday 4th to Wednesday 9th July an average of 22.5mm fell each day; a total of 135mm. Cederberg received 300mm and the general water catchment area swelled and gathered until a visible bore came down the Verloren River.

On Monday 7th July the vlei rose 1000mm overnight over an area of 13 square kilometers and covered the 3 meter pole at Johan’s jetty. The bridge and the newly tarred road along the water’s edge were inundated.

July was cold and wet; the shutters stayed closed and the ugly old Dover was commissioned to warm the house and us, cook our food and keep a kettle ready. Winter sheets and sheepskin boots emerged and afternoon walks became brisk.

Nick perfected a mulled white wine with brown sugar, cinnamon, allspice and cloves which warmed gently next to the kettle and a pot of fresh leek and potato soup. 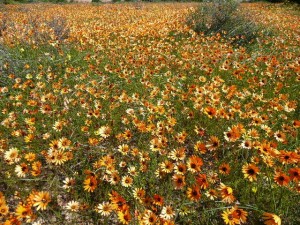 Orange daisies of the Biedouw Valley

The high rainfall and subsequent sunny days of early August brought out innumerable flowers all over the West Coast and we went up to the Biedouw Valley for a change of scene with Pia and Russel and Pixel.

At a lovely farm we met a charming pair of young Germans, their two small children and Rocco, an enormous black German shepherd. The highly socialized Pixel, friend to all dogs, easily charmed Rocco and our hosts were amazed.

They explained that Rocco had killed all their laying hens except one wise white bird; who still consistently lays an egg every day! Rocco also killed 10 of their neighbour’s sheep and eliminated all the local feral cats…..

We visited Wuppertal, an old Moravian mission station and now a lovely peaceful village set in amongst mountains and spring flowers. We were served the best chicken pie I have ever eaten and good strong coffee.

While we were away on Saturday 23rd August, the sea along the west coast suddenly receded, rapidly emptied Lambert’s Bay harbour and then filled it up again. Diedrich’s boat was spinning on her mooring like a top. Buildings in St Helen Bay were damaged and 11 days later the sea was still running high with swells of 5 meters, from Port Nolloth to Durban. A house on the sea in Port Nolloth was demolished. 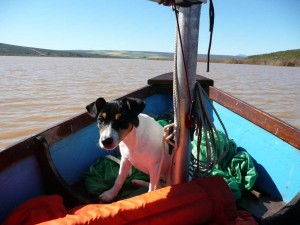 Sailing the Vlei with Pixel

Something mysterious and powerful must have happened under the Atlantic Ocean.

30th August found us at Gerrit Burger’s annual Steenbokfontein Art Exhibition, an eclectic collection of paintings, ceramics and jewellery. Fresh green salads, marinated feta cheese, humus, olive and chili pastes and hot pitta bread were served on the house and earthy red wine could be bought by the glass.

Everyone was there in exuberant variety including Ha-man who produced unique music on his cello and Nama-san who played a didgeridoo to an impressed audience.

We drove back home early enough to be inside when a furious storm came in from the north; the entire Western Cape lost power as trees came down in the wind. 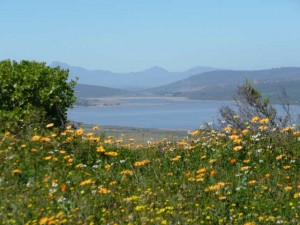 Goose-Loose and Genevieve plus the original 9 geese from Paarl and their 7 surviving progeny have begun breeding in amongst the bushes below old Brier’s cottage.

Nick told Oom Theunis about the qualities of goose eggs and he can be seen unsuccessfully searching the landscape on his way to check on Lena’s sheep.

Unbeknownst to Oom Theunis a dark grey water mongoose is living under an old boat beneath the manitoka tree on the edge of the vlei. The mongoose pops out now and then and sets the geese scurrying as he proceeds inland; he may be well accountable for the dearth of goose eggs. 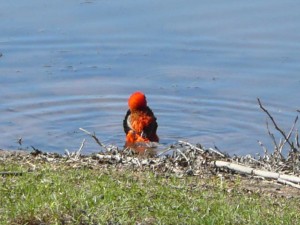 All these dogs and at least 11 small children were racing in circles around the lawn, in amongst preoccupied parents deep in conversation.

The whole spectacle was straight out of one of Gile’s cartoons.

The Vleikraal Nature Reserve, now ratified and protected, is already responding to its new found isolation; we have seen Springbok, Klipspringers and dassies up in the kloofs. 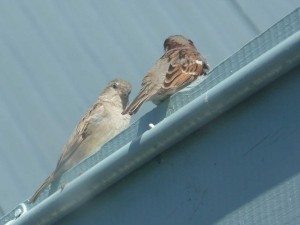 Whilst out in his canoe recently, Brian met 5 Cape clawless otters, each of which approached him and stretched up out of the water to examine him with disdain. The fifth otter completed his observation of Brian with a catlike hiss and they all swam away.

On our verandah several pairs of sparrows are nesting in boxes built under the eaves by Nick, despite Lena insisting the birds would never use them!

Every time Nick leaves the door to his studio open, a pair of determined Karoo Scrub Robins diligently deposits small rocks and chunks of clay on the highest book shelf!

Life on the wild side is wonderful.