The Verlorenvlei Coalition (VC) welcomes the granting of an interim interdict against Bongani Minerals (Pty) Ltd. and a local landowner to cease prospecting activities for tungsten in the Moutonshoek Valley.

The interdict, lodged by the Bergrivier Local Municipality and granted in the Cape High Court on Thursday, 22 March 2012, has brought welcome reprieve for concerned residents who believe that prospecting and mining activity will be to the detriment of agriculture, tourism and the environment in the region, specifically the RAMSAR protected Verlorenvlei wetland near Elands Bay.

The respondents indicated that they intend opposing the court action. They have until 13 April to file answering papers. The matter is scheduled to be heard on 23 May. 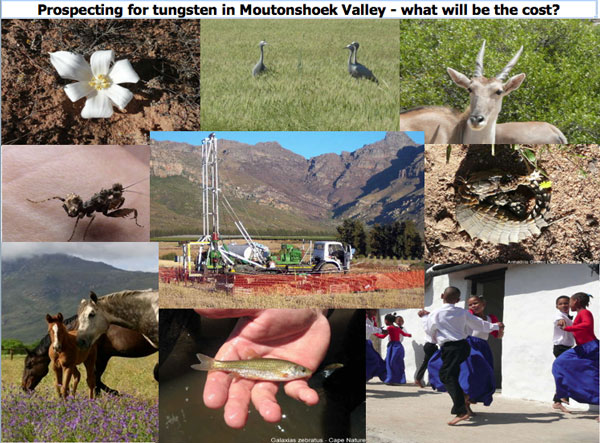 1 July 2011 – the Department of Mineral Resources issues Bongani Minerals with a controversial right to prospect for among others tungsten, molybdenum and so-called “rare earths” in the Moutonshoek Valley, the main catchment of the Verlorenvlei – a declared RAMSAR wetland and Important Birding Area (IBA) 30 km downstream.

One of the affected farmers, Moutonshoek Investments, appealed the DMR’s decision to grant this prospecting right, highlighting many basic shortcomings in the application, such as errors in technical calculations of drill meterage, questionable proof of financial ability and insufficient provision for rehabilitation. They were supported by the Verlorenvlei Coalition, a grouping of farmers, residents, farmworkers, businesses and environmental groups representing the broader community of Moutonshoek and Verlorenvlei in their struggle against Bongani Minerals’ attempts to establish an open-cast mine in this fertile West Coast valley.

Regardless of its legitimacy, the prospecting right signed by Bongani Minerals’ Director Johannes van der Walt, states that “the granting of the right does not exempt the holder from complying with the relevant provisions of the Mine Health and Safety Act, 1996 (Act no 29 of 1996) and any other relevant law in force in the Republic of South Africa.”  [our emphasis]

One such law is the Land Use Planning Ordinance (Ordinance no 15 of 1985), also referred to as “LUPO” which is in effect in the Western Cape and which falls under local government jurisdiction. Although the mining company insists their prospecting right allows them to go ahead with their plans, the drilling is illegal because the farmers in question have not been authorised to rezone their farms as required by LUPO to allow for a land use other than agriculture. According to Bergrivier municipal manager, Christa Liebenberg, the farms are zoned for crop cultivation, animal breeding or the operation of a game farm.

In December 2011 Moutonshoek Investments brought an interdict against the prospecting licence for their property, Portion 1 of Namaquasfontein 297, based on the premise that the land would still need to be rezoned  – in this case a consent use or a departure use to allow mining and/or prospecting. A court date must still be finalised.

1 March 2012 – Notwithstanding the LUPO requirement, Bongani Minerals commenced with prospecting activities on certain farms in the Verlorenvlei area, after two of the landowners – Johannes Coetzee and Herman Coetzee – signed agreements with Bongani Minerals to allow prospecting.

We read with interest in the press that Bongani had been informed by the provincial Department of Environment and Development Planning that prospecting does not fall under the province’s land use planning ordinance. On enquiry the Department had no record of such instruction. More specifically, in terms of law the province would not be the relevant authority to consult in this instance.

On 22 March the Western Cape High Court granted and interdict brought by the Bergrivier Municipality to restrain the owners of Kromvlei farm and Bongani Minerals (Pty) Ltd. from continuing prospecting work until the case has been heard. The court ordered that drilling work be halted by latest Tuesday 27 March.

3. The contribution you can make to our cause